Today Mr. Clark came to the elementary to conduct the fall R.I.F. with the help of Whitney Hernandez and Christina Rodgers.  Students from each grade level gathered around and selected a book that they were allowed to keep.  Each student was then given a Halloween bag filled with goodies.  During the year Mr. Clark makes several trips to the elementary to conduct R.I.F.  This is something he has done faithfully for years going well beyond his retirement.  Through Mr. Clark’s dedication and with the support of the community, over the years countless books have fallen in the hands of students.  Through his dedication, the fundamentals of reading will continue to be an important part in a child’s education.

If you walked into Electra Elementary this morning, you most definitely needed to have your best game face on.  There were ghost and goblins around every corner.  Who would have guessed that the elementary was haunted.  However all was well because the Electra Tigers and cheerleaders made their usual Friday visit to the delight of the little elementary ghouls.  Even Mother Nature helped out to supply the ghoulish backdrop with her pouring rain.  The cheerleaders rushed out with umbrellas in hand to each car to escort students up to the door to keep them dry.  Meanwhile the Tigers were walking around the cafeteria and visiting with the elementary students.  So much going was going on and excitement filled the air.  So many memories were being made.  This morning was a small example of what a wonderful district and a wonderful school body we have.  I’m so proud of our Tigers and cheerleaders.  Thank you for all you do.  Also thank you to your sponsors.  All I can say is “What about those Tigers….and those cheerleaders!!!!”  💕

Coach Shawnda Rasco took Electra’s Cross Country Team to race in Regionals at Lynn Creek Park in Grand Prairie.  Coach Rasco posted that the course did change due from the fact that it flooded from all the rain that Grand Prairie received.  However, she did state that the weather was absolutely perfect for running.

Jonathon Barrera with his time of 17:56 qualified for State as an individual runner.  Coach Rasco posted that this was the last time someone has qualified for state in Cross Country since 2007.  In her post she stated that “I am very excited that he is going to have the honor of running in the State Meet!”   Jonathon will run at Old Settlers Park in Round Rock on November 7th at 3:10pm.  In her post she asked that “if you see any of these hard-working runners, please give them a good well done and a high-five.”

I want to thank Coach Shawnda Rasco for the information and the pictures.  Techy Tigers also wants to extend our congratulations to all the Electra Cross Country runners.  We are so proud of you.  Best of luck Jonathon.  We will definitely be  rooting for you!

This is Red Ribbon Week at Electra Elementary.  For today, the students were asked to wear red, white and blue for Monday’s theme “I Pledge to be Drug Free.”  Along with students supporting the colors of red, white and blue, the students will also come up with a class pledge which will be placed outside of their classroom door.  Below is a list of the themes for the rest of the week.

Friday – “Spook out the Drugs” – wear your costume

Weekly the Tigers and cheerleaders have faithfully driven over to Electra Elementary to visit with students during breakfast.  This Friday, 10-23-2015, pink filled the room in honor of helping the America Cancer Society fight for a cure. It was so neat to see the excitement on the elementary student’s faces as the varsity and cheerleaders walked in.  Of course the Tiger was a big hit!  I have to admit, I loved seeing my now grown up ( 🙁 ) students who I dearly miss.

Thanks to Cheney Electric’s time and efforts, Electra Elementary’s flags are once again waving. This year elementary has not been able to raise the flags because of years of wear and tear on the rope which finally caused it to deteriorate.   Through Cheney’s generosity, a new rope was put back on the flag pole.  Now Electra Elementary will have many more years to proudly fly the flags.
Embed Code:

On October 9, 2015,  Electra Elementary gathered in front of the school to show their support and Tiger spirit.  Signs and banners were made for our Tigers to send them on to their victory as they pounced Haskell with a 38 to 23 win.

Friday the Electra Volunteer Fire Department came to the Electra Elementary and demonstrated techniques used to extinguish fires to the students.  Each year the Electra VFD faithfully makes their yearly visit to the school during the Fire Prevention month.  We all must remember that the Fire Department runs on a volunteer basis. Our community and school extends our thanks to this group of men and women for their hard work and dedication.

Last Friday night, the circus came to town which was sponsored by the Electra Elementary PTO.  The Culpepper & Merriweather Circus presented two shows to our local community. The night was filled with dog and horse tricks, clown antics, aerial acts, and many other types of entertainment.  The town showed its support of the school sponsored event by filling the tent. 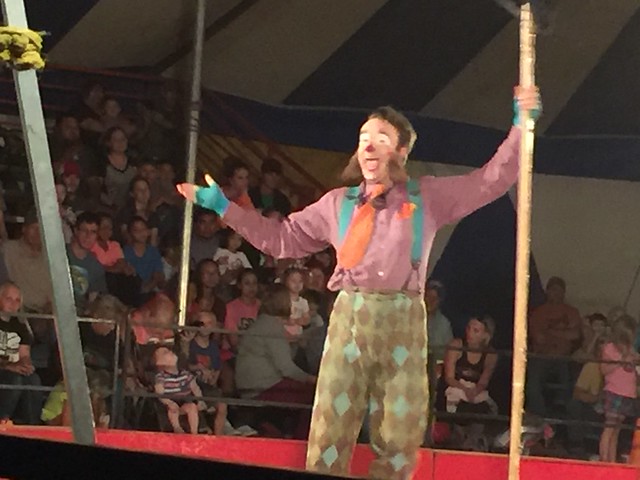